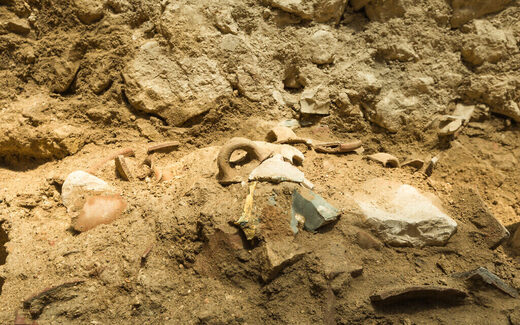 © Eliyahu Yanai/ City of David
Remains of tools discovered in Jerusalem’s City of David within a layer of destruction from the 8th century BCE, which coincided with a massive earthquake mentioned in the Bible. The tools were likely shattered during the quake.

Until now, the earliest destruction layer of Jerusalem comes from the Babylonian conquest of 586 BCE. For archaeologists, an earlier historical anchor — if proven through hard, securely dated evidence — serves as an important stratigraphical benchmark for scientific excavations in Jerusalem.

According to Tel Aviv University Prof. Israel Finkelstein, who was not involved in the current research, “destructive earthquakes in Jerusalem are possible, as shown by the well-recorded earthquake of 1927… The early layer of the book of Amos includes materials which relate to the 8th century and hence it is possible that a devastating earthquake left a strong impression and was recorded.” 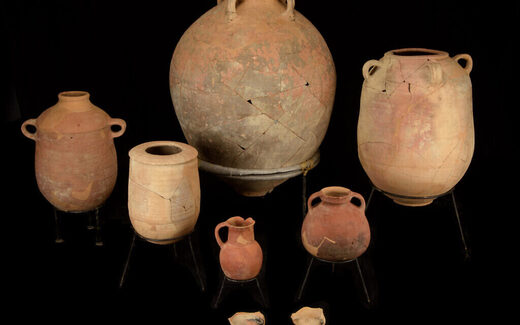 © Dafna Gazit/ Israel Antiquities Authority
Vessels discovered in Jerusalem’s City of David within a layer of destruction from the 8th century BCE, which coincided with a massive earthquake mentioned in the Bible. They are photographed after their restoration by Joseph Bocangolz.

Through decades of research, archaeologists and seismologists have successfully documented the historical veracity of such an earthquake event that spread throughout the Kingdom of Judah 2,800 years ago. For example, at Finkelstein’s Tel Megiddo site, a similarly dated earthquake has been established after years of research tracing seismic activity in several periods, “including Stratum IVA which indeed dates to the first half of the 8th century BCE,” Finkelstein said.

But only in recent excavations led by Dr. Joe Uziel and Ortal Chalaf was this destruction layer discerned in Judah’s capital, Jerusalem. And it could be a real game-changer.

“It’s not that per se we’re providing here a way to date, but rather an anchor that we can compare what comes before and what comes after,” cautiously explained IAA excavation co-director Uziel. It is not a new tool or technology to independently date an object or layer, such as carbon-14 dating. However, “if I know I should be looking for some kind of destructive event in the middle of the 8th century then I know what comes before and after,” said Uziel, who today also heads up the IAA Dead Sea Scrolls Lab.

Uziel told The Times of Israel that although his team was the first to identify this destruction layer, in reviewing previous excavation reports, they have concluded that other areas of the eastern slope near the Gihon Spring where the team is excavating also exhibited similar destruction. A research article and lecture on these findings will be available to the public on September 2 at the City of David’s Megalim Conference.

According to Uziel, an additional contemporary 8th century BCE earthquake destruction layer can be found less than 100 meters south of the area being now excavated. It was excavated by Yigal Shiloh in the 1970s and published by Alon de Groot. There, the archaeologists discovered a building collapse that accorded with what Uziel saw in his area.

“It was never described as destruction but what they found sounds very similar: a bunch of vessels shattered and restored, fallen stones, the possible collapse of the 2nd floor,” Uziel noted.

“We can draw a line and say these are probably two separate buildings showing the same evidence,” said Uziel. “I feel pretty secure about it: one reason is the archaeological evidence, which at other sites has been found dating to the same time period, and two is the archaeological evidence at other sites which very clearly shows ‘earthquake’ and not military acts of destruction,” he said, citing Tell es Safi/Gath and Hazor, among other locations.

Recent geological work on sediment in the Dead Sea region by a team led by Prof. Amotz Agnon of Hebrew University’s Institute of Earth Sciences indicates that there were at least two major earthquakes in the Land of Israel in the mid-8th century BCE.

Agnon told The Times of Israel that while it is rare to pinpoint such a temporally distant event at such high resolution — to the century level — in the middle of the 8th century, his team sees a record of several earthquake events at the Dead Sea. As such, he said, this earthquake event discovered in Jerusalem “has potential” to be considered as a new dating anchor for archaeologists.

Whether it was one earthquake or a series is up for debate. It is not uncommon, said Agnon, to see earthquake clusters spanning over even decades of time: one big tremblor can trigger a sort of delayed domino effect of destruction.

So while it may be impossible to link the earthquake destruction layer in Jerusalem with one specific event, in combination with the contemporary clear earthquake evidence found elsewhere in the Land of Israel, one could consider the group of potential tremors as one earthquake event, said Agnon.

The earthquakes’ epicenters were focused in the Jordan Valley, he said, and there is ample evidence of destruction at ancient sites in modern Jordan, where they had even more destructive impact.

“There were events that destroyed the entire country — or half of it,” said Agnon. “So the event at Hazor could be connected to the event in Jerusalem.”

Agnon did not participate in the current City of David study, but is a co-author on research on ancient earthquake destruction throughout the country.

One such site is Tell es-Safi/Gath, where Agnon said he saw, during a rare unsettled period, that a big wall had fallen from a force that “couldn’t have been anything other than an earthquake.”

According to Bar-Ilan University Prof. Aren M. Maeir, the director of the Tell es-Safi/Gath Archaeological Project, the proof of earthquake is “based on specific ways that walls collapse — in our case evidence of the ‘waves’ of energy that hit after an earthquake.”

Maeir was able to date the earthquake layer based on the levels below, including the securely dated Hazael destruction of 830 BCE. Above the ample signs of battle and conquest was “a period of abandonment with windblown sediments, then the earthquake, and then above it, two levels dating to the late 8th cent BCE.”

For his part, the new evidence of earthquake destruction in Jerusalem makes sense.

“I’m not surprised at all about these finds in Jerusalem. First of all, mid-8th century BCE earthquakes are mentioned/hinted to in the contemporary books of Amos, Isaiah and the much later Zecharia. Second — Jerusalem is much closer to the assumed epicenters (Jordan Valley) of earthquakes than Gath,” Maeir told The Times of Israel.

Uziel and Chalaf write in their upcoming research paper that the importance of this new evidence goes beyond the historical fact of an earthquake having occurred in ancient Jerusalem and even “beyond the linkage between archaeology and the biblical text.”

“This provides an archaeological anchor for Jerusalem, which can now begin to be developed for the relative dating of assemblages before and after this anchor. In this sense, the Amos earthquake may serve Jerusalem’s archaeology in the same manner as the destruction of Lachish in 701 BCE,” write the authors.

Although this fucking mad monkey is going to leave soon for good, but keep a