“Despite the findings, the Saudi researchers convluded that “vaccine” benefits outweigh the risks, and encouraged everyone to receive the injections.”

SERIOUSLY !!! ARE YOU FUCKING KIDDING ME ??? 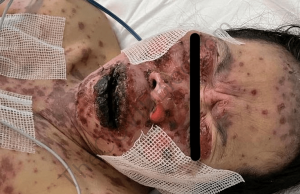 RIYADH, SAUDI ARABIA — A 49-year-old woman is on the mend after developing a disturbing post-injection immune-mediated skin disorder.

Researchers at the Prince Mohammed Bin Abdulaziz Hospital in Riyadh published their peer-reviewed case study last week. The unnamed woman went to the emergency room one week after receiving the first dose of experimental Pfizer mRNA. They describe the case as follows:

The patient started to develop fever, fatigue, and headache followed by skin lesions affecting her trunk and starting to spread to her face and upper limbs with oral ulceration. Patient was seen in the primary health care center and was given paracetamol and did not notice any improvement. The patient had no history of taking any new medication or any cosmetic treatment in the past two months before the development of the skin lesions. Upon examination, the patient was vitally stable, anxious, and in severe pain. She had numerous purpuric and dusky red macules involving the chest, 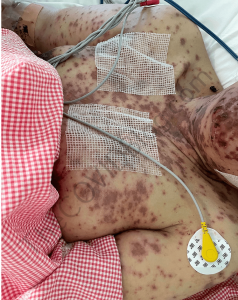 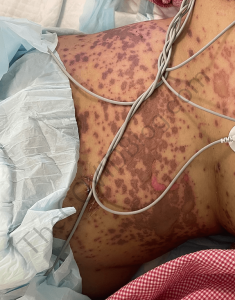 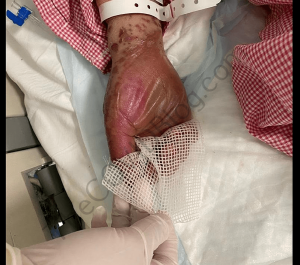 face, genitalia, and upper thighs with areas showing coalescence of lesions with flaccid bullae and areas of epidermal detachment with positive Nikolsky’s sign. The mucosa was involved in her condition, where she had extensive oral ulceration and hemorrhagic crusting over the lips,

as well as bilateral conjunctival congestions along with upper eyelids erosions, 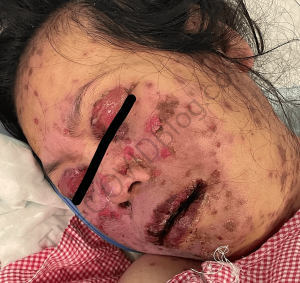 and genital mucosal lesions. Her body surface area (BSA) involvement is estimated to be more than 30%.

The patient was given two doses of etanercept 50 mg/ml subcutaneously, the first one on the day of admission and the second one after two days of her admission. The patient stopped developing new lesions after two days from the first dose, and complete healing was noted after 22 days. 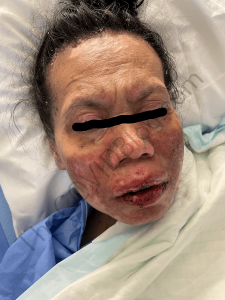 Researchers diagnosed the woman on the Stevens-Johnson syndrome/toxic epidermal necrolysis (SJS/TEN) spectrum. The diseases have mortality rates upwards of 35%, according to the researchers. Medications and vaccines are the primary causes of these conditions. TEN is considered a medical emergency and requires immediate discontinuation of the “offending agent.” Researchers concluded that there were “no other identifiable causes” for the TEN in the subject woman other than the Pfizer injection.

The instant case is the first severe/life-threatening skin reaction we’ve covered as a result of the mRNA injections. There are 66 cases of SJS and TEN recorded in the Vaccine Adverse Event Reporting System (VAERS) as of August 13.

But only 1% of vaccine adverse reactions are reported to VAERS, according to Harvard Pilgrim Health. Thus there have likely been over 66,000 SJS/TEN spectrum disorders after COVID-19 injections so far.

Despite the findings, the Saudi researchers convluded that “vaccine” benefits outweigh the risks, and encouraged everyone to receive the injections. You may read the entire case study here.

Most people are either too embarrassed or afraid of backlash to report their experimental injection adverse reactions publicly. Everyone is learning the short-term effects of these injections in real-time, with many of said events involving the largest organ in the human body (skin). 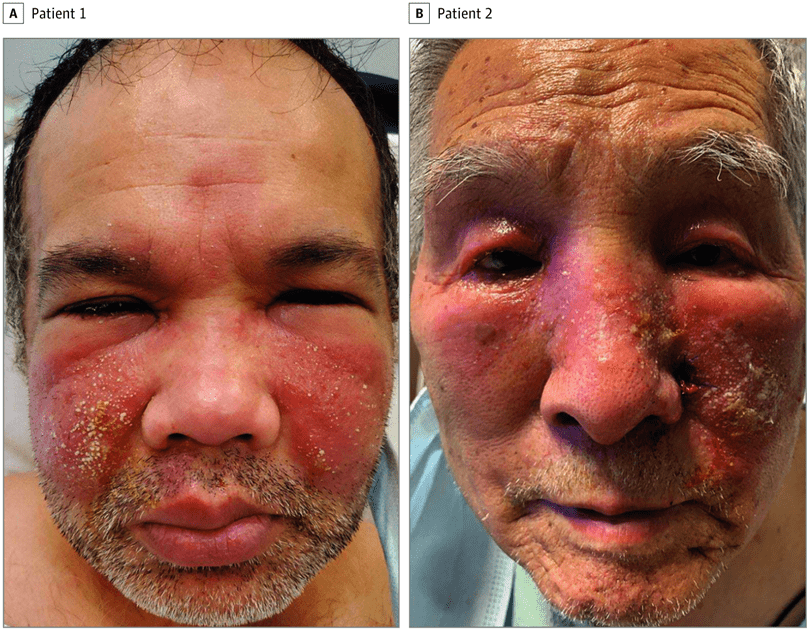 An April 1 letter published in the New England Journal of Medicine chronicled many cases of erythema and induration within hours or days following the first or second injection of experimental Pfizer mRNA. 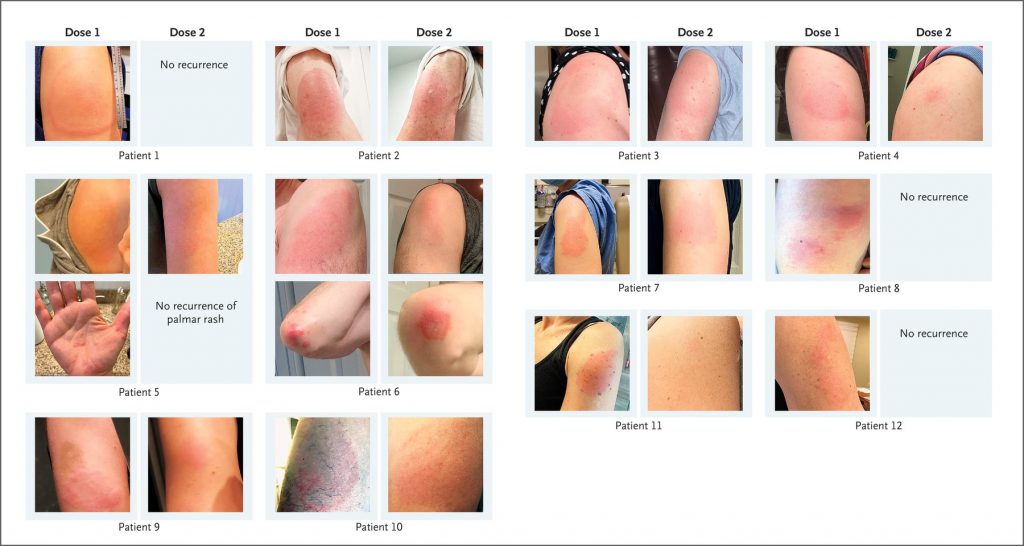 These injections have two purposes: murder and maiming. You are consenting to one or the other by allowing someone to stick a needle in your arm. Take a stand or play Russian roulette with your life and well-being. Stay vigilant and protect your friends and loved ones.