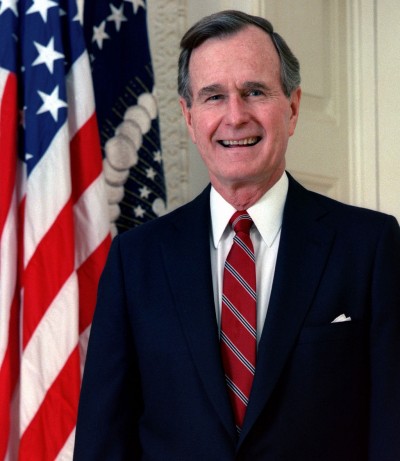 This article was first published on March 31, 2017. An earlier version was published in 2015

Lest we forget, one day before the 9/11 attacks [as well as on the morning of 9/11, the dad of the sitting President of the United States of America, George Herbert Walker Bush was meeting none other than Shafiq bin Laden, the brother of the alleged terror mastermind Osama bin Laden.

It was a routine business meeting on September 10-11, no conflict of interest, no relationship to the 9/11 attacks which allegedly were carried out on the orders of Shafiq’s brother Osama, no FBI investigation into the links between the Bush and bin Laden families.

What is presented below is a factual account. Confirmed by the Washington Post, “fellow investors” of the Carlyle Group including Osama’s brother Shafiq bin Laden and Dubya’s dad former President George H. W. Bush met in the plush surroundings of New York’s Ritz-Carlton Hotel on September 10-11, 2001.  Their business encounter under the auspices of the Carlyle Group was unfortunately interrupted on September 11 by the 9/11 attacks.

It didn’t help that as the World Trade Center burned on Sept. 11, 2001, the news interrupted a Carlyle business conference at the Ritz-Carlton Hotel here attended by a brother of Osama bin Laden [Shafiq bin Laden]. Former president Bush [senior], a fellow investor, had been with him at the conference the previous day. (Greg Schneider, Pairing the Powerful With the Rich, Washington Post, March 16, 2003)

A timely business meeting on September 10-11 at the Ritz Carlton with Osama’s brother disrupted by the 9/11 attacks: pure coincidence, totally unrelated to the 9/11 attacks.

What was GWB’s Dad “Poppy” doing with Osama’s brother Shafiq on September 10?

Media coverup:  the WP report came out 18 months later in March 2003. There was no media coverage of the Shafiq bin Laden – G. Herbert W. Bush meeting in September 2001. The event was known, yet mainstream media editors decided not to provide coverage of this timely 9/11 encounter at the Ritz Carleton.

A day later, on the evening of September 11, 2001, president George W. Bush pronounced a historic speech in which he defined the relationship between “terrorists’ and “state sponsors of terrorism”:

The search is underway for those who are behind these evil acts. I’ve directed the full resources of our intelligence and law enforcement communities to find those responsible and to bring them to justice. We will make no distinction between the terrorists who committed these acts and those who harbor them. (emphasis added)

Let’s be clear as to what happened: the dad of the sitting president of the US was “harboring” (to use GWB’s expression) the brother of  the alleged terror mastermind of the 9/11 attacks.

Should the president have not  instructed the “law enforcement communities” to at least question his dad?

Why was Poppy Bush’s meeting with Osama bin Laden’s brother Shafiq not subject to the normal rules of  police investigation. “What were you doing with Osama’s brother”.

Why was this not the object of investigative media reporting or US Congressional enquiry?

The bin Laden – Bush Carlyle Group meeting was also confirmed by The Economist in a June 2003 article entitled C- for Capitalism (see screenshot below):

ON the day Osama bin Laden’s men attacked America, Shafiq bin Laden, described as an estranged brother of the terrorist, was at an investment conference in Washington, DC, along with two people who are close to President George Bush: his father, the first President Bush, and James Baker, the former secretary of state who masterminded the legal campaign that secured Dubya’s move to the White House. The conference was hosted by the Carlyle Group, a private equity firm that manages billions of dollars, including, at the time, some bin Laden family wealth. It also employs Messrs Bush and Baker.

In the immediate aftermath of the attacks, when no one was being allowed in or out of the United States, many members of the bin Laden family in America were spirited home to Saudi Arabia. The revival of defence spending that followed greatly increased the value of the Carlyle Group’s investments in defence companies.

The Carlyle Group is embroiled with the defense and intelligence establishment. “It is widely regarded as an extension of the US government, or at least the National Security Agency, the CIA, and the Pentagon.” (The Economist June 26, 2003) Normally, under established rules of police investigation, both Shafig bin Laden and the president’s dad George Herbert Walker Bush would have been remanded in custody for police questioning and in all likelihood, Shafiq bin Laden would have been arrested as a potential suspect. But that did not happen.

In 2003, the CBC brought out a carefully investigated report which focusses on the bin Laden-Bush family connections:

No Travel Ban for the Bin Ladens

Meanwhile, suspected Muslims are arrested on a mere suspicion, –e.g. that they have an old school friend, who’s cousin’s 86 year old grandmother is an alleged sympathizer of the “jihad”.

The Global War on Terrorism is Born

On the day following the departure of the bin Ladens, President Bush delivered an address to a joint session of the House and the Senate (September 20, 2001), in which he stated unequivocally his administration’s intent to “pursue nations that provide aid or safe haven to terrorism”, with no exceptions (e.g. Saudi Arabia and Pakistan)

“We will starve terrorists of funding, turn them one against another, drive them from place to place, until there is no refuge or no rest. And we will pursue nations that provide aid or safe haven to terrorism. Every nation, in every region, now has a decision to make.

From this day forward, any nation that continues to harbor or support terrorism will be regarded by the United States as a hostile regime [state sponsor of terrorism]. President George W. Bush, 20 September 2001 (emphasis added)

The Bushes and the bin Ladens, they’re with us and with the terrorists.