These very serious folks behind a very sinister agenda ! – A

The footage of the Atlas robots performing parkour is as impressive as it is unsettling. 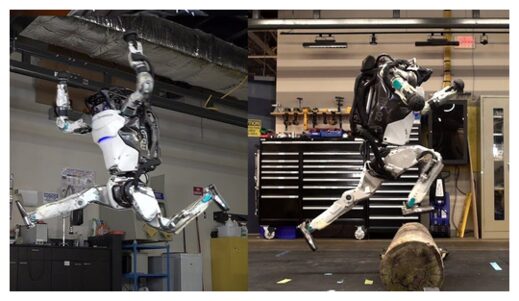 In the video, a pair of Atlas robots can be seen leaping over large gaps, vaulting beams, and even performing backflips. The robot can even be seen jumping over a board while using its arm to remain steady.

While the display seems like anything but “free” running – as the original developers of parkour had envisioned – the routine does seem like an impressive, if terrifying, display of effective coding that took months to perfect, according to the Hyundai-owned robotics firm.

“It’s not the robot just magically deciding to do parkour, it’s kind of a choreographed routine, much like a skateboard video or a parkour video,” said Atlas control lead Benjamin Stephens.

Unlike its robotic dog Spot, which controversially hit New York City streets last year before being pulled, Atlas isn’t a production robot. Instead, it’s a research model meant to see how far the limits of robotics can be pushed.

In the past, Boston Dynamics has displayed the robot’s feats with videos of Atlas jogging and even busting out some cool dance moves.

Team lead Scott Kuindersma said in a statement that in about two decades, we can expect to coexist with robots that move “with grace, reliability, and work alongside humans to enrich our lives.”

Until then, some of us will continue to reserve our right to feel a bit queasy about the prospect of people being chased down by these skilled free-running (and dancing) machines.