It has been long known that what “AIDS” researchers have presented as photos of “HIV” show normal cellular particles in use for export/import and other tasks. As those particles are designed, in contrast to viruses, for cellular use only, they are very unstable when removed from their context, and not able to be isolated and photographed in an isolated state. Genuine viruses are so stable that it is easy, in order to prove successful isolation, to photograph them directly as three dimensional particles in the electron microscope (EM) without prior chemical fixation. In contrast, the cellular-transport and other particles are so unstable (excluding cell organelles like Mitochondria, the energy producing sites which are able to be isolated in a stable form) they can only be photographed in a chemically fixed state, in cells, tissues or in supernatants. As these particles are not isolated and therefore are together with other materials the chemically fixed and resin-embedded cells, tissues or liquids – the mixed material has to be cut in very thin sections (ultrathin sections) to be able to see anything – it’s not possible in the electron microscope to look through thicker sections. Of course existing viruses can be photographed in ultrathin sections too but, and this is the point, in their isolated form. All that have been shown to us “HIV” are ultrathin sections of cellular particles (1, 2).

Computer enhanched EM photo of a cell surrounded by small particles. The blue/grey stained particles, which are claimed to be HIV particles attacking or (depending on the publication) leaving a white blot cell, are artefacts of the staining and/or fixation process and at best may be cellular particles entering or leaving the cell (in a well known process called endo-/ or exocytosis). These kind of nice photographs, made by Lennart Nilsson, have been published without any evidence that the particles have a viral origin. 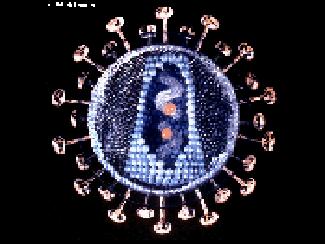 HIV researchers believe the AIDS virus looks like this; like a bomb or water (blood) mine. This model is based on the detection of cellular particles in cell lines under very special conditions. Such particles never have been isolated or somehow else demonstrated to exist as a virus or be of viral origin. This is nothing but a modell based on a collection of proteins of various size (no other characterization!) which by antibody detection (known as HIV- or AIDS-test) have been chosen to be said to represent parts of HIV according to the ill-minded and false concept of retroviruses and how they should look like.

While most people in the U.S. and Western Europe go right on believing that the